On 20 October 1957, Vincent Price and Alfred Hitchcock paired up for for an episode in Alfred Hitchcock Presents called The Perfect Crime. Besides having the rare distinction of being the only time that these two masters of the macabre united, this episode is also one of only a handful (20 to be exact) that was directed by Hitchcock himself. 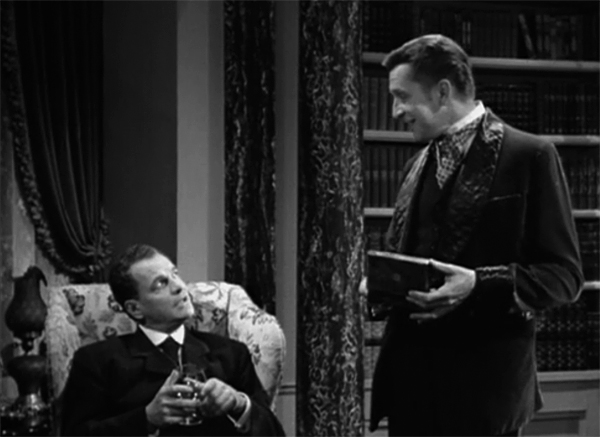 Vincent Price plays egocentric prosecutor Charles Courtney, who keeps a shelf of mementos from each of his cases – with one space left for what he calls ‘The Perfect Crime’. One night he is visited by lawyer John Gregory (played by James Gregory) who plans to confront Courtney over a case in which he believes the prosecutor planted evidence in order to secure a guilty verdict. But Gregory hasn’t counted on Courtney carrying out his own ‘perfect crime’…

Being more talk than action, Hitch’s two-hander is quite reminiscent of the director’s big-screen thriller Rope, but he certainly ratchets up the tension with his clever camera techniques (see below), while Price is perfectly cast as the puffed-up prosecutor whose trophy case hides a ghoulish Hitchcockian twist.

DID YOU KNOW?
The script was written by Stirling Silliphant, who penned the screenplays for the 1970s disaster epics, The Poseidon Adventure, Towering Inferno, The Swarm and When Time Ran Out, based on a story by Ben Ray Redman; while Price’s co-star, James Gregory found fame as the opinionated Inspector Luger in the US TV series Barney Miller.

HITCHCOCK’S LONG SHOT
When it comes to suspense, Alfred Hitchcock is a true master and one of his best devices was the single long shot in which the camera gradually steps from wide to close, increasing tension as the scene builds to crescendo. Hitch uses it in many of his classic thrillers, but also uses to great effect in The Perfect Crime. You can see an annotated breakdown in HITCH20, a documentary web series exploring the film techniques used in the anthology series, here.