The dolls in this 1967 Spain/German AIP exploitation story about modern-day white slavery are a group of lingerie-clad beauties – 12 or so, not 1000 – being held captive in a Tangiers mansion. Vincent Price and Martha Hyer use their magic act as cover for the abductions, which they do on behalf of the mysterious King of Hearts. George Nader (best known for starring in the cult turkey Robot Monster, and being Rock Hudson’s one-time lover) plays a vacationing detective whose investigation into a friend’s murder leads him to the dollhouse… 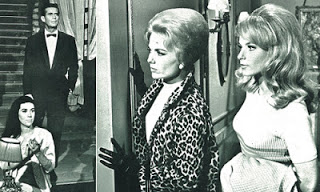 Hammer veteran Terence Fisher was originally slated to direct the film. The first script treatment was entitled Sax Rohmer’s House of Dolls, and was to be set in Victorian London, but filmed in Ireland. Illness, however, forced Fisher to drop out, and the production was put on hold until it was transferred to Madrid, Spain and future Brookside director, the late-Jeremy Summers, was brought in to film a revised version of the script (penned by producer Harry Alan Towers under his pseudonym, Peter Welbeck).

PEEVED PRICE
By the mid-1960s, Price was in despair over the roles offered to him under his globe-trotting AIP contract, and House of 1000 Dolls only added insult to injury following the catastrophic failure of the Mario Bava-lensed Dr Goldfoot and the Girl Bombs (shot in Italy) and the soggy action adventure War-Gods of the Deep (aka City Under the Sea), which was shot in the UK.

PRICE AT THE PRADO
Given that Price’s role was merely a supporting one meant the actor and could indulge in his well-known passion for art by visiting Madrid’s famed Museo del Prado. And while Price was away from the set, nudie scenes were filmed for the Germany release.

Click here to hear Vincent narrating a guided tour of the Prado in 1960.

RELEASE DATES
The film was released in West Germany on 7 December 1967 as Das Haus der Tausend Freuden (check out the lobby cards here) and in Spain on 3 June 1968 as La Casa de las Mil Munecas. Both of these were cut, with around 10minutes take out for the Spanish release, small cuts were made for the Germany release (to make way for those skin shots). In the US, it premiered on 8 November 1967 before coming out on 13 March 1968 on a double-bill with Maryjane, a sensational expose of high school marijuana addicts, starring Fabian and Diane McBain. UK audiences got the film in April of 1968.

THE 2013 UK DVD RELEASE
I have always had a soft spot for this tawdry tale, and even though Price plays a supporting character, he carries it off with usual aplomb. It also has that naughty but nice erotic look about it, especially the dolls in their lingerie and high heel mules, that makes it more like a Carry On than a seedy sex film. The Mediumrare Entertainment release contains a fine print of the film (I can say goodbye to my HBO Home Video VHS copy finally), but only has a black and white gallery of photos (mainly Maria Rohm) as an extra.