On 20 February 1974 in the US, ABC’s Wide World of Entertainment presented The Horror Hall of Fame: A Monster Salute, an entertaining 70-minute videotaped TV production hosted by Vincent Price, which you can watch in full above.

With the help of his hunchback sidekick (played by comic star Billy Van, who also appeared with Price around the same time in the Canadian TV series The Hilarious House of Frightenstein), Vincent (attired in a cape similar to the one he wore in Theatre of Blood) presides over the pun-filled, canned-laughter proceedings which honours the horror film genre from its earliest beginnings all the way up to The Exorcist, whose Tubular Bells ended up sounding the death knell of classic horror.

First up, Price praises some ‘old fiends’ and encounters Frank Gorshin, who shows off a canny impression of Boris Karloff, before moving onto praising Cushing, Lee and himself (of course), where he shows a clip from The Abominable Dr Phibes.

Slipping into a red velvet smoking jacket, it’s off to the lab for some silent movie memories with John Carradine. Then comes another costume change and a chat with The Addams Family’s John Astin about humour and horror, showing clips from the likes of Bambi Meets Godzilla and John Landis’ Schlock, while also paying tribute to Forry Ackerman’s Famous Monsters of Filmland and those classic Aurora Glow in the Dark model kits (this was my favourite bit). 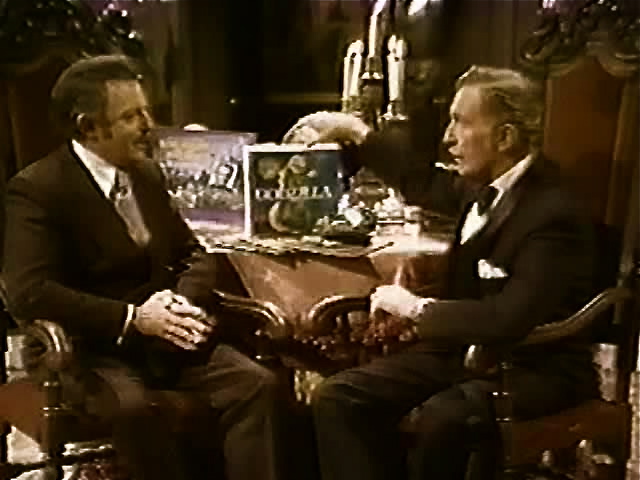 Heading into the dungeon, Vincent meets SFX legend William (Bill) Tuttle, who talks far too briefly about his extensive career before being tasked to turn American Graffiti actress Candy Clark into a monster. After a short coffin nap (aka a commercial break) Vincent then speaks to In Search of Dracula author Raymond T McNally (which was the weak link for me in this silly, but fun show).

John Astin (who makes a great double act with Price) then turns the tables on our eloquent host in a This Is Your Life segment in which we get some Price-less clips and where Vinnie describes how Theatre of Blood was the best horror movie he ever made. Presenting Vincent with his Horror Hall of Fame award, Astin also gives him a gift certificate for a burial at sea – which is kind of ironic considering Vincent had his ashes scattered at sea when he died in 1993. But seeing as Vincent loved a good laugh (especially at his own expense), I’m sure he’d be seeing the funny side of that now.