This was the decade in which Vincent Price cemented his screen persona as the new king of horror through his association with American International Pictures and their Edgar Allan Poe cycle of films that gave Hammer’s full-blooded Gothic horror pictures a run for their money. Roger Corman’s dread-filled House of Usher scored big at the box office and gave Price one of his finest roles (as tortured aesthete Roderick Usher). And he followed that with a barnstorming performance (as the demented Nicholas Medina) in Pit and the Pendulum. 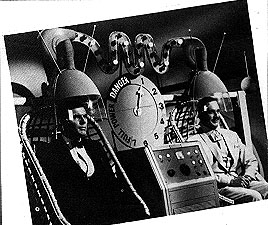 But Price also enjoyed sending up his new screen image in AIP’s comic spoofs The Raven and Dr Goldfoot & the Bikini Machine, while it was on prime-time television where Price garnered a new generation of ‘young’ fans, by appearing in the big hits of the day, including Get Smart, F Troop, The Man from U.N.C.L.E., Voyage to the Bottom of the Sea and Batman (as Egghead, the world’s smartest criminal), as well as hit panel shows like Hollywood Squares. 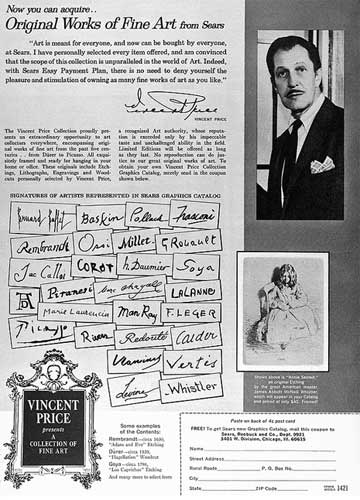 Vincent’s new-found status also brought him opportunities to do what he loved most – to buy and talk about art. A deal with Sears led to the launch of  The Vincent Price Collection of Fine Art in 1962, which gave everyone the chaNce to own original works from the great masters – from Rembrandt to Picasso and Dali – as well as some of the best contemporary artists of the day, from as little as $10 to $3000.

Price collected thousands of pieces over the ensuing years, often during his travels abroad while he was working on projects like The Last Man on Earth, which may have been set in modern-day LA, but was shot entirely in Rome, Italy. And it was during this time that Vincent’s wife Mary gave him a wonderful surprise, a daughter, Mary Victoria (born 27 April 1962).

In 1964, returned to London, where his stage career began, to work on Corman’s penultimate Poe project, Masque of the Red Death. It proved to be the beginning of a 20-year love affair with his second-favourite city (his first being Rome). But the same could not be said of some of the projects that AIP handed to him after he took on a new contract with the company. One however would prove to be his most difficult, and a cause célèbre – 1968’s Witchfinder General.

But changes were waiting in the wings as Price finished the decade with a return to Broadway, in the 1968 production of the musical Darling of the Day, opposite British actress Patricia Routledge (who later found fame on UK TV as Hyacinth Bucket in Keeping Up Appearances). At a time when the counter-cultural movement was taking its last dying breathe and the Vietnam war was provoking protest on a global scale, the production was out of step with the defining mood of the day, unlike the ground-breaking production taking place down the street from the George Abbott Theatre – the tribal rock musical Hair. Read more about Darling of the Day HERE

Pit and the Pendulum

Confessions of an Opium Eater (aka Souls for Sale)

Diary of a Madman

The Comedy of Terrors

The Last Man on Earth
– Touring the Rome Locations

The Masque of the Red Death
– Original Sound Track Release

City Under the Sea

Dr. Goldfoot and the Bikini Machine

1968
Witchfinder General (aka The Conqueror Worm)

The Trouble With Girls

Spirits of the Dead (narration only)