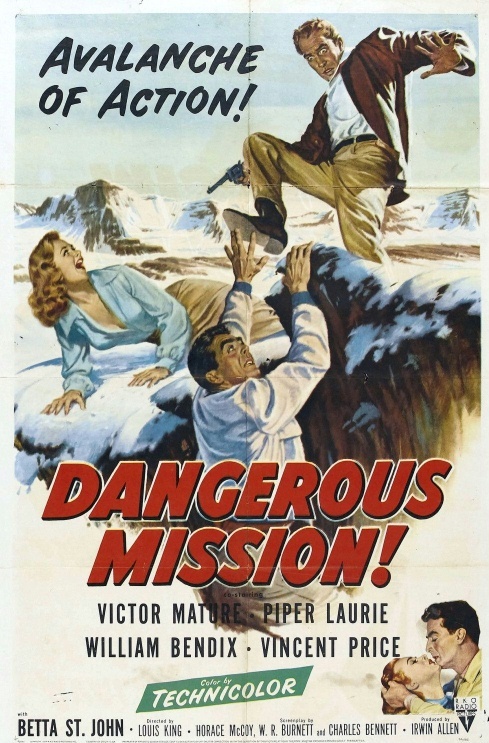 After witnessing a gangland murder, New York nightclub salesgirl, Louise (Piper Laurie) is afraid to testify and flees to Montana where she takes on a job working in the gift shop at Glacier National Park. There, she attracts the attention of amateur photographer Paul Adams (Vincent Price), who she starts dating, and ex-Marine Matt Hallett (Victor Mature). But she’s unaware that one is a ruthless killer and the other has been sent by the DA’s office to protect her. Will she be able to work out which one is which before its too late? 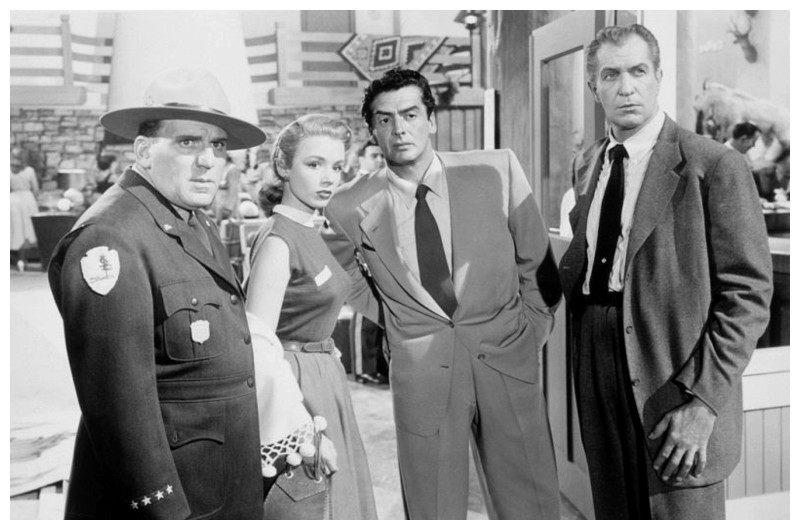 This RKO B-movie adventure thriller was released in 1954 to cash in on the 3D craze that had begun with House of Wax that was released the year previously (with Price top billing).

Producer Irwin Allen showed the first sparks of his future fame as the Master of Disaster by getting his workman-like director Louis King to pepper the film with ordinary people getting caught up in mini catastrophes, including an avalanche during a square dance party and a forest fire. But despite the rugged snowbound outdoor setting, gorgeous Technicolor photography, a starry cast of film noir favourites, and a screenplay by Alfred Hitchcock’s early collaborator Charles Bennett, the film failed to deliver. 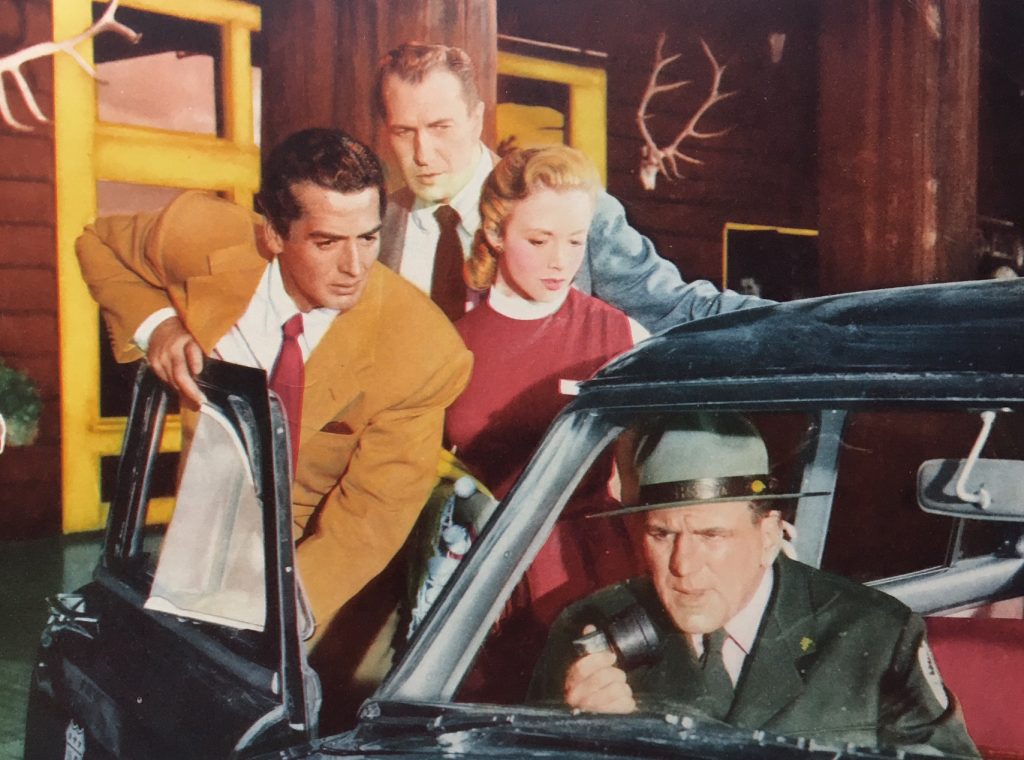 It certainly starts with a bang, but only roars into life during the big forest fire scene and the climactic chase through the glacier fields. In between, however, audiences have to deal with the cast uttering some really bad dialogue (although Price – who, unsurprisingly, turns out to be the villain, delivers his with relish), an unnecessary red herring of a story involving a Native American accused of murder, and some wonky rear projection, which spoils the stunning Glacier National Park cinematography. 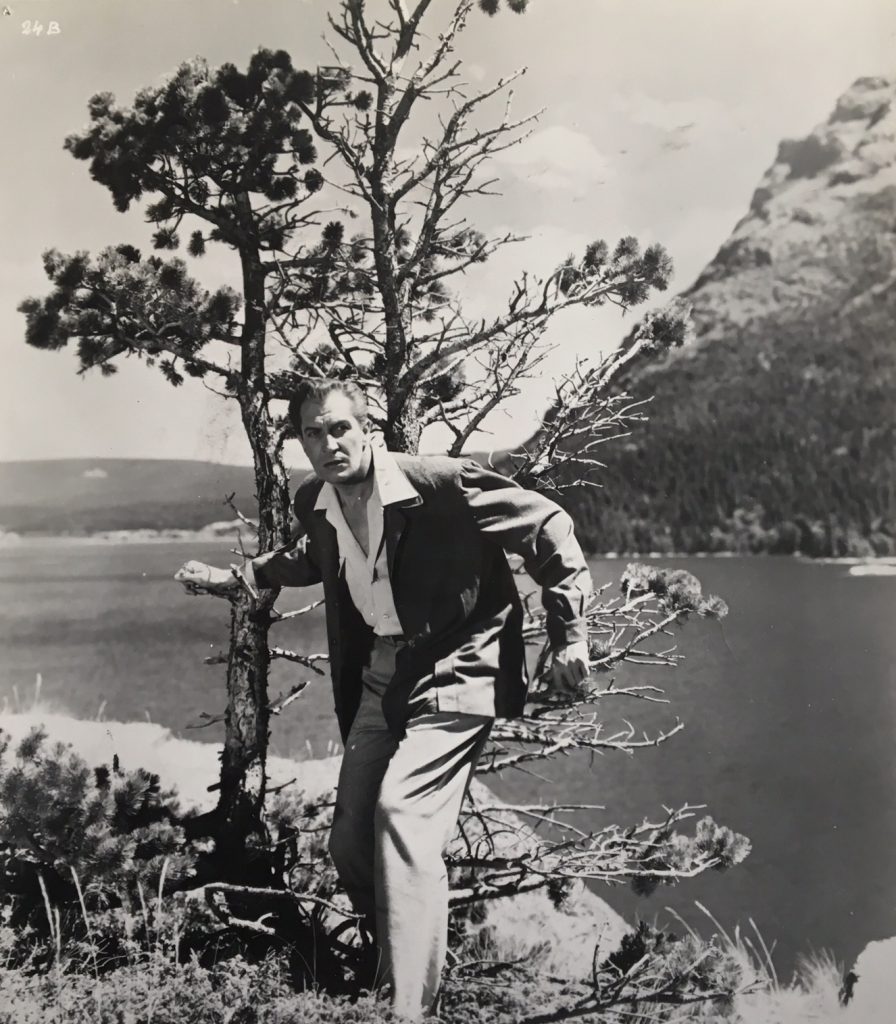 Originally entitled The Glacier Story and Rangers of the North, Dangerous Mission was shot in July 1953 (with two RKO soundstages turned into the glacier at a cost of $45,000) and, following its premiere screening in Salt Lake City on 25 February 1954, it went on general release in the US on 6 March 1954.

Price got on so well with Irwin Allen that he ended up appearing in two more of the producer’s movies, The Big Circus and The Story of Mankind, as well as doing a guest role (with puppets) in an episode of TV’s Voyage to the Bottom of the Sea.

To date, there has been no official home entertainment release of the film – but I wish there was one…

REVIEWS
‘Since our great national parks are open to virtually anyone who cares to visit them, there probably is no way of preventing their occasionally being exploited and abused. And that is most certainly what has happened to Glacier Park in the R. K. O. film, Dangerous Mission, which was plopped down flatly at the Holiday yesterday… a company of Hollywood people has the cheek to play a tale that hasn’t the vitality or intelligence of a good comic-strip episode. It is a miserably dull and mixed-up fable about a hunt for a missing witness to a crime, with Vincent Price eventually emerging as some sort of villain, which is obvious all along.’ Bosley Crowther

‘An action movie made for 3D that starts off looking like a real corker but winds up looking as stale as month-old bread. Director Louis King (Frenchie/Green Grass of Wyoming) never steers it away from its awkwardness. Despite a fine cast (unfortunately, they all give corpse-like performances), capable screenwriters Charles Bennett and W.R. Burnett, and veteran story writers Horace McCoy and James Edmiston, the film is at best bearable…William Bendix plays a blustery park ranger chief who knew Mature from their days as marines. His mission, in this film, is to put out a forest fire that has nothing to do with the plot, but looks swell in 3D. The film is noteworthy for the clumsy job Gene Palmer turned in as editor.’ Dennis Schwartz 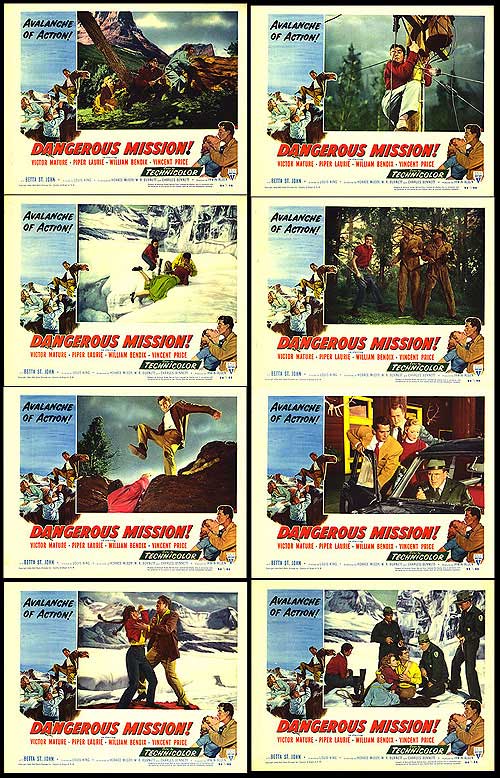