Ever wanted to know about the birth of the oil industry. Well take a look at this rare, corporate film from 1954, Born in Freedom: The Story of Colonel Drake starring Vincent Price, which premiered in Titusville, Pennsylvania on 29 March 1954, and became the first colour programme to be shown on the DuMont television network on Halloween the same year. 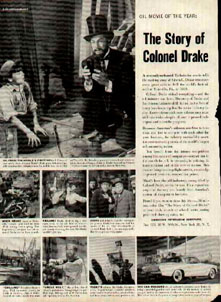 In 1857, Edwin L Drake (Vincent Price) is sent to investigate an oil seep in a creek near Titusville, Pennsylvania.

After conferring with local landowner Dr Brewer (Lloyd Corrigan) and Joel D Angier (Will Wright), who devised a method of collecting oil using baffles, Drake reports back to Pennsylvania Rock Oil Company’s James M Townsend (Thurston Hall) that it should be feasible to increase the yield beyond the 3-6 gallons.

Put in charge of a crew (headed by Alan Hale Jr), ‘Colonel’ Drake first tries to dig down to the source of the oil and is heckled for his efforts. Water entry causes failure, as it does to Drake’s first attempts to drill to the oil with Billy Smith (Andy Clyde), an experienced salt driller.

Overcoming many other obstacles, Drake’s innovation to shield the well from water entry by using a drive pipe finally allows drilling to proceed until striking oil in August 1859. His perseverance heralds the start of the oil industry – and our reliance on fossil fuels.

You can watch it in full here, from the official Vincent Price Legacy YouTube channel.